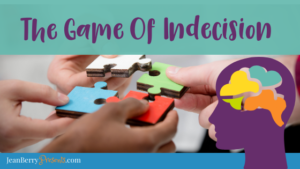 I used to play a game called Indecision, it was a simple game of illusion and safety.

I would win the game by not making any decisions or deciding very slowly until the answer became inevitable or too late.

One time I was deciding how to promote a course that I had authored and was looking forward to sharing. The challenge was that I didn’t actually have the skills to talk about, market or offer a product, and there were many options. I fooled around with the choices until it was just days before I had scheduled the event. So I hastily sent out an email and did a FaceBook post. Yes! I had decided and done it!

Unfortunately, no one signed up. Why do you suppose that was?

I’m pretty sure I WON the game of Indecision that day. 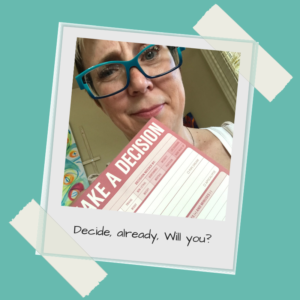 I was cleaning out my office last week and I found this “Make a Decision” pad that I bought in some stationery store. I actually laughed out loud. Apparently my decision making skills were so non-existent that I needed prompts. I looked over the pad and realized, had I used it, it still probably wouldn’t have helped me. Because I was so fearful of ‘doing it wrong’ that anything that came from it would have only overwhelmed and stressed me more.

I realized that I had stopped playing the Game of Indecision when I mastered another game.

The game is Angels, Peacocks & Butterflies: 100 Days of Miracles. 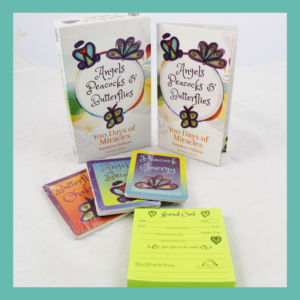 This is a game about hearing and trusting your intuition so that you can get in and take action on it. It slowly takes you from small decisions to larger ones so that when the really BIG decisions show up, you can more easily hear the most aligned choice for you and take that BIG action.

Do you want to easily decide?

I invite you to play the game. I have a fantastic special going on right now for YOU!
Check it out here. (I think you’ll like the little cartoon video I made for you!)

Thanks for joining me in the PLAY Nation. 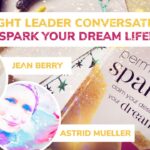 AND, Make Loads of Money I am … END_OF_DOCUMENT_TOKEN_TO_BE_REPLACED